SCROLL DOWN FOR THE PHOTOS

I cannot say too many kind works for the way I was treated by the All Nipon Airways (ANA) staff on my way to Japan this past April.

In just one meal, not only did I consume one of the most valuable shiny metals on our planet, tiny cured fish, sweet beans, pickles from numerous plants, several species of fish prepared in various ways, bamboo, seaweed….but it was also a wonderful way to consume over two hours of the 11.74 hour trip to the Narita airport.

Thinking about the future and our food supply, five hundred odd years from now technicians may just stimulate part of our brains to make us think we were actually tasting all of these flavors but way back in 2013 people actually ate the real things responsible for these flavors.

And to top it all off, two flavor ice cream (vanilla and coffee and a cookie with a base of red raspberry. Oh, and the cookie had a line of chocolate in the middle of it.

While dawdling with my dessert and writing this the flight attendant bent over to tell me something I presumed was important.

“We will be completing our meal service two hours before arriving at the Narita airport.”

I thought she meant that I needed to hurry up and finish my desert but then realized that we had another seven and three quarters of an hour to go before that time and responded, “but that is a long time from now”. Her response: “If you want anything during that time don’t hesitate to let me know.”

Got it, the kitchen is open for another seven plus hours! Very nice to know!

I cannot even begin to describe what each item of each meal was. I think the item in the foreground was a sashimi mix in a little quiche crust. First behind was some sort of cured meat wrapped around some (?). Behind, some mixed veggies.

From the top, a crisp, clear and refreshing O-sake from a mountain brewery run by four family members on an island two islands South of the main one. Seaweed the texture of spinach which has spoiled in the fridge but chewy like licorice (in reality that is not a bad thing). I believe it has an abundance of iron and is quite pleasant. Pickled veggies with fish in a sort of vinegar sauce. The photo below features the large dish in the foreground close up. 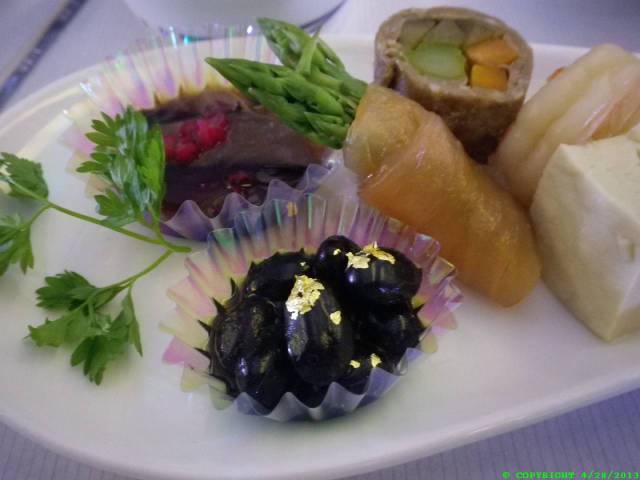 Flecks of gold on the sweet beans – yes, actual gold. This is the way I like to consume my heavy metal. The texture is reminiscent of lead but with a brilliance unmatched by that baser metal. As it passes over the tongue one feels a sense of privilege and wonderment. I wonder how many toothless prospectors of 1849 labored so that I could eat this end product of their efforts.  A waste but considering the tiny amount of it, what each of us throws away in just one day in consumer packaging is more significant. I wonder if there is some other planet with a core made not of iron like our Earth but one of pure gold? If so, maybe the residents there sprinkle their sweet beans with iron filings….

To say I had red wine, salmon, rice, soup and condiments would miss the whole point of this. The main point of this particular serving was taste rather than overreaching presentation. 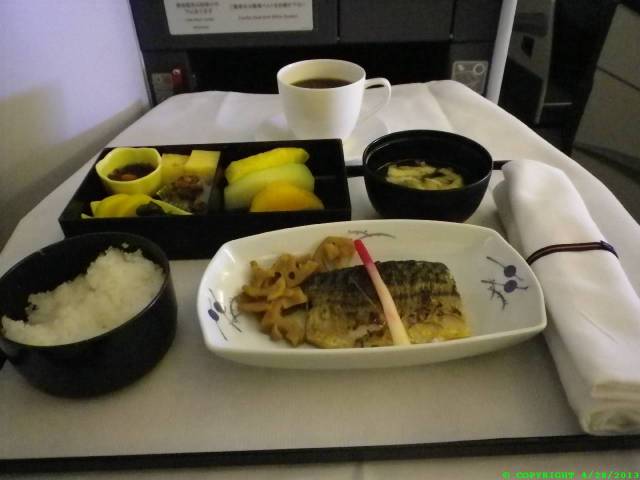 Breakfast ANA style. What a beautifully classic coffee cup! The contents was also classically strong, dark and wonderful as well.

This site uses Akismet to reduce spam. Learn how your comment data is processed.